Ramadan Came To An End This Week, and There’s No Way I’d Be Able To Make It Without Cheating

Every religion has holidays/celebrations that are accompanied by certain customs and behavior. During Lent, Christians aren’t supposed to eat meat on Fridays. During Hanukkah, gifts are given on each of the 12 days. And during the Muslim tradition of Ramadan, which came to an end on Wednesday, they are supposed to refrain from eating between sunrise and sunset. The reason why I bring this up is because a few of my coworkers just got finished fasting for Ramadan, and It made realize there is no way in fuck I would be able to do it.

From what they’ve told me, their gameplan is to wake up at the ass crack of dawn, have a huge breakfast, and then just “Try not to think about food for the rest of the day”, as one of them put it. They do this for a month straight, and the mere thought of doing this for one day made me have a panic attack.

My narcissism usually provides me with enough wishful thinking to trick myself into thinking I can do anything, but this whole “Fasting for a month straight” thing just doesn’t seem possible for a gluttonous slob like myself.

Additionally, Ramadan participants are supposed to refrain from alcohol, smoking, sex, and other sinful behavior. So basically, if I were to follow Islam, I would be the worst Muslim of all time. It would be Day 1 of Ramadan, and after having my stomach growl one time around 9 AM, the next thing you know I’d be eating a donut and completely disavowing my faith. In my mind, when posed with choosing between the prospect of eternal bliss in the afterlife or a donut when I’m hungry, that chocolate frosted donut is winning every time.

Food is one thing, but the other stipulations are what are really the nail in the coffin for me. Even if I managed to squeak through the first week without eating during the day, the weekend would come around and all bets would be off. My friends would just have to text me the beer emoji, and I would immediately crack like an egg on concrete. Bring on the drinking, smoking, drug use, premarital sex, and I’m sure other sins. The list goes on. Sorry Muhammad, I tried my best.

I guess the point of this pointless blog was that I don’t have the mental or physical fortitude to fast for a month straight. I’d love to pretend that I do, but skipping lunch is a foreign concept that I’ll never be able to understand, like somebody explaining astrophysics to me in Arabic.

When it comes to eating, I’m such a needy little bitch. If I’m hungry, I’m hungry, and nothing is gonna stop me from eating. I have the self control of a fat kid in a chocolate factory, and if you’ve read my recent blog about my laziness/weight, you know that I’m well on my way to making that a reality.

In all seriousness, shoutout to anybody that managed to make it through Ramadan without cheating. That seems impossible, and I wish I had that amount of self control.

In the meantime, just know that I’m not pregnant, I’m just eating good. 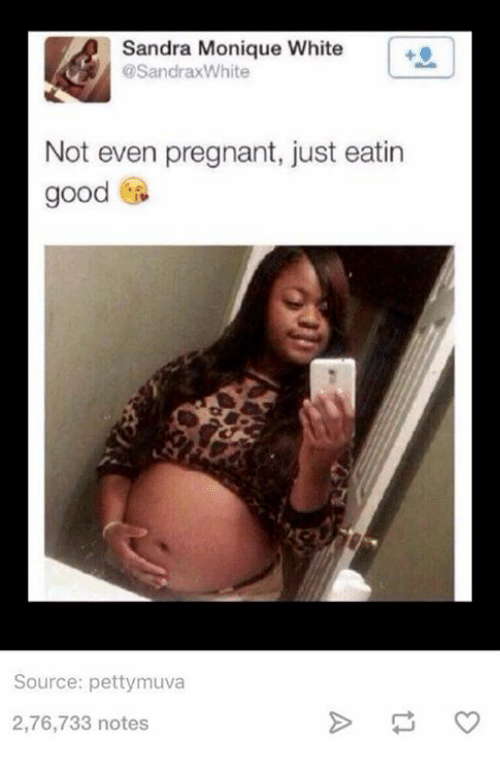