Last night’s Bruins win was unfortunately shrouded by sheer panic in Boston, when news began circulating that Red Sox legend David Ortiz had been shot in his hometown of Santo Domingo, Dominican Republic. The early reports stated that he was the victim of an attempted robbery and listed his condition as unknown, leading many to fear the worst. Not to mention, this is the Dominican Republic we’re talking about here: A place that between the multiple tourists dying and other bad events recently, they can’t really afford any more bad press. Given the location of the shooting, this added to the dread because I’m not sure people were all too confident in their medical practices. If I were to ever get shot in a country like The Dominican Republic, I think I’d rather perform the surgery on myself.

Anyway, like the clutch player that he always has been, Big Papi thankfully pulled through once again and is gonna be okay, despite taking a bullet point blank to the back that popped out of his stomach like the monster in the movie Alien. His condition is currently listed as stable, although he did have to be treated for internal bleeding, as well as had parts of his gallbladder and intestines removed. I don’t know much about internal medicine, but if he needs any of my organs, all he has to do is ask.

Saying that this infuriates me doesn’t even do it justice. I wish I could dive through my screen and jump in front of the bullet like a secret service agent protecting the president from a sniper. That was an assassination attempt, plain and simple. It was also the worst assassination attempt of all time. How are you gonna walk up behind somebody, fire at them point blank, and not kill them? That failed hit was basically like if John Wilkes Booth missed Lincoln and hit one of the actors on stage instead. I’m obviously glad that he didn’t, but that’s fucking embarrassing.

One thing that 3rd world countries do a much better job at than 1st world countries is their legal system. I know this would be right on brand as a racial joke that I’m making, but I’m not even kidding. Allow me to explain. Sure, these countries are rampant with unbelievable amounts of violence and corruption, but whenever something like this happens, the perpetrator is immediately met with such awesome street justice that it puts a smile on my face and a bulge in my pants. I present to you, Exhibit A

This is the shit Brain that shot David Ortiz in the Dominican Republic in an attempt Robbery. What a scum 🤬🤬 pic.twitter.com/ckJUbFFPYB

I wish I could Venmo every Good Samaritan in that video that came to Big Papi’s aid and beat that piece of shit within inches of his life. Here’s the face you make when you try, and fail, to kill a Dominican legend 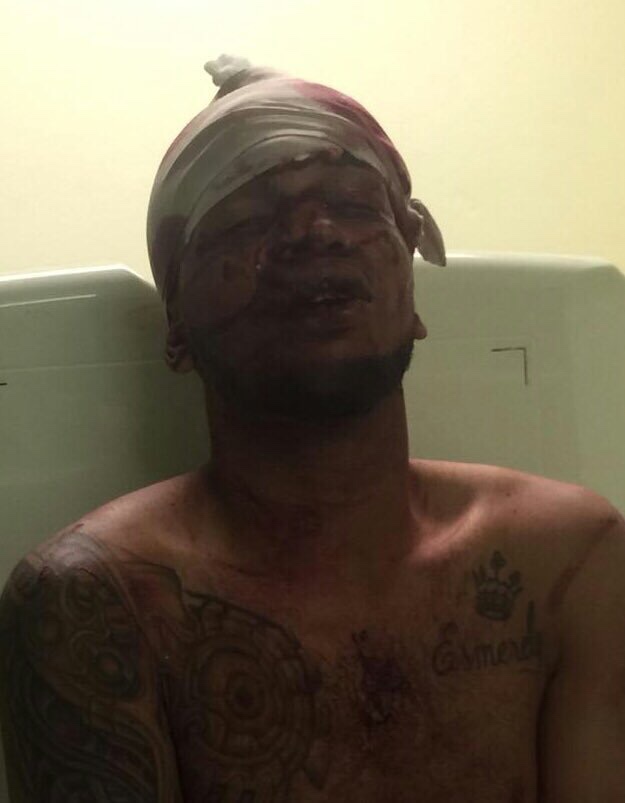 Now I’m not too up to date on the penal system of The Dominican Republic, but I’m assuming this guy won’t make it past Thursday. For all I know, he already got violently gang raped to death in prison, the thought of which makes me want to pop a bottle of champagne. If he is still alive, the punishment should fit the crime. I suggest that his punishment should be Big Papi, in full Red Sox uniform, beating him to death with a baseball bat at Fenway Park in front of a sellout crowd. I’m talking homerun swing after homerun swing to this guy’s entire body, and then finally finishing him off with a downward thrust to the head similar to how Gallagher used to smash watermelons.

All jokes aside, above all I’m just glad that Big Papi is okay. This couldn’t have happened to a better dude, which just makes the entire situation even crazier. He’s expected to return to Boston for additional treatment at Mass General Hospital, which has lead to some wishful thinking given the upcoming Stanley Cup Final game on Wednesday night in Boston.

Before every game, there is a “Banner Captain” who waves the Bruins flag to hype up the crowd. It’s usually some type of celebrity or athlete, a good example being Bill Belichick earlier in this series. There has been speculation that Tom Brady would be the Banner Captain for Game 7. But with this recent development, if David Ortiz showed up to the game and waved the Bruins flag, I think the TD Garden would explode. The cheers would be so loud that everybody would leave the stadium deaf, and the Bruins would win by at least 100 million goals.

Here’s to hoping that the people in charge find a way to make this happen somehow. We’ve got our captain, Zdeno Chara, playing with a broken jaw, and now we have another Boston legend recovering from a gunshot wound with ease. The term “Boston Strong” isn’t hyperbole, and we exemplify that every chance that we get. Now cue the legend himself hyping our city up after the Boston Marathon Bombing. Boston strong baby, and we want the fucking cup!

PS: It was awesome seeing all the support pour out for Big Papi last night from tons of athletes and celebrities. Just goes to show how much people love this guy. Hell, even A Rod came out with a statement

Some things are bigger than sports. Prayers up for the Large Father