A College Professor Had To Cancel An Exam Because He Got Shot, Has Covid, And Is In The Middle Of A Bad Divorce

The universe has a way of throwing unexpected things at us that can wreak havoc on our plans. Whether it be a car accident or a bout of explosive diarrhea, these inconveniences can quickly derail the schedule we were on and cause us to miss whatever it was that we planned on doing that day

School is a place where these types of unforeseen things seem to happen tenfold, and whether legitimate or completely made up, they account for a large amount of the given reasons why people weren’t in class or failed to turn in an assignment on time. For example, my family members were dropping like flies during my junior year of college (at least that’s what my professors were lead to believe). I “attended” so many funerals that year, I must have seemed like I was Will Ferrell’s character in Wedding Crashers and was going to them for fun

Although it’s usually the student that is telling an excuse to their teacher, sometimes it’s the other way around. Teachers have lives too, and occasionally something happens to them that causes them to miss class or whatever. A great example of this is floating around the internet right now. According to the picture, this professor had to cancel an upcoming exam because he not only got shot and is recovering in the hospital, but he also has Covid-19 and is in the midst of a messy divorce 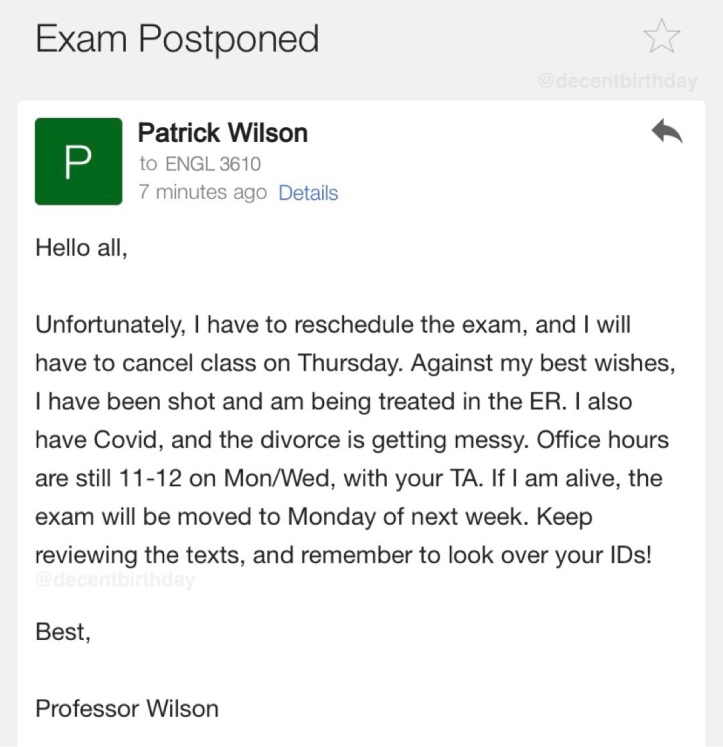 This is quite the email, and here’s what I imagine the students looked like after reading it

Talk about a shitty turn of events. If any of those things happened on their own it would be a day ruiner, but having all 3 of them happen at once seems like enough to ruin your year and then some. Did this guy step on a crack while walking under a ladder and petting a black cat or something? That’s the only explanation for someone being this unlucky

I know you shouldn’t laugh at the misfortunes of others, but let’s do exactly that for a second. The idea of this many random and bad things happening to one person at once is funny enough, but it’s the wording of the email itself that really does it for me. Let me break down what I mean by that

“Against my best wishes, I have been shot and am being treated in the ER”

This is a laugh out loud funny way to announce to your class that you just got shot. There’s just something about the grammatically polite way he says it that makes it so hilarious to me. I’ve never been shot before so I can’t speak from experience, but I’d imagine it would also be against my best wishes, seeing as most of my wishes don’t involve taking a bullet to the chest. I’m with ya Pat. I too would prefer to not get shot if given the option

“I also have Covid, and the divorce is getting messy”

I thought there was no way he could top the sentence before it, but he somehow found a way with this gem. After dropping a bomb on us by saying he’s laying in a hospital bed with a bullet wound, he then casually mentions that he also tested positive for Covid. “You know that deadly disease that is going around? Yeah, well turns out I have that too”. Talk about unfazed. But he isn’t done yet. Without even starting a new one, he continues on with the Covid sentence and adds that not only is he getting divorced, but that it isn’t going well. I hope his wife at least had the decency to make sure he was okay before throwing his clothes on the lawn, changing the locks, and hiring the best divorce lawyer in town

“If I am alive, the exam will be moved to Monday of next week”

Holy shit, what a line. This guy just can’t miss at this point. Here he is typing up an email from his hospital bed, and he decides to nonchalantly leave the status of the exam up in the air depending on if he survives or not. If he lives, I guess they’ll take the exam. If he dies, then they won’t. It’s no biggie either way in this professor’s eyes. I love this guy, I really fucking do

I always thought of myself as a pretty unlucky person, having injured myself countless times and lost more bets than I can count, but I’m reconsidering things after seeing this email. After taking a quick glance at what this guy is going through, I feel like the luckiest person on the planet.

So thank you for the laughs Patrick. I can tell from the email that you’re a funny guy with a good outlook on things, and I hope your luck turns around soon. Everybody knows that a stretch of bad luck just means you’re due for some rebound luck eventually. I’d say get out there and play the lottery ASAP, but you might want to wait until the divorce is finalized first so you don’t end up losing half of your winnings