Shuffle Song Of The Day (1/4/23): “Leaving The Past” By Immortal Technique

“Leaving The Past” is song by the NYC rapper Immortal Technique, and it appeared as track 15 on his 2nd studio album, Revolutionary Vol. 2, which was released in 2003 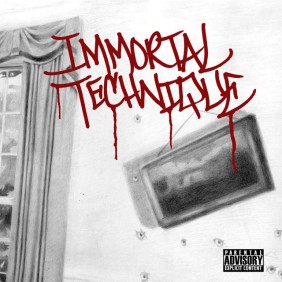 The term revolutionary makes a lot of sense for this album title, because that’s the exact image that Immortal Technique has sculpted for himself, and through his angst-charged lyrics, he is. Anybody who is familiar with his music knows that he’s pretty underground and his songs tend to revolve around forgotten historical events and somewhat anarchist ideas that break away from the norm. In a lot of ways, he is sort of like a strictly rap-based Rage Against The Machine

I consider most of his songs to be pretty interesting and cool, but sometimes I feel like he tries too hard to be THAT guy. Do you know what I mean by that? We all know somebody that is a constant contrarian, and that’s fine. But when they go too far, it’s just annoying. For example, sometimes I feel like Immortal Technique is only a few lyrics away from getting down on his knees and suck Che Guevara’s dick. But hey, that’s just my opinion

However, “Leaving The Past” does not go too over the top with the stuff I mentioned at the end of the last paragraph. Instead, it is filled with a lot of clever punchlines over a catchy guitar sample, so it’s pretty tough to dislike a combination like that. I especially love the closing line, which has sort of become a motto I remind myself of often: “You can make the future, but it starts with leaving the past”

In conclusion, I think he’s a great rapper, and I’m sure we all remember where we were the first time some older kid showed us “Dance With The Devil” for the first time

They told me I would never make it, I would never achieve it
Reality is nourishment, but people don’t believe it
I guess it’s hard to stomach the truth like a bulimic
It’s a dirty game and nobody is willing to clean it
But this is for the paraplegic, people dreamin’ of runnin’
Ladies married to men who don’t please ’em, dreamin’ of comin’
Verbally murderous like David Berkowitz when I’m gunnin’
Some cowards on the Internet didn’t think I would sell
Scared to talk shit in person, ’cause they stuck in a shell
And couldn’t understand the pain of being stuck in a cell
Hell is not a place you go, if you’re not a Christian
It’s the failure of your life’s greatest ambition
It’s a bad decision to blindly follow any religion
I don’t see the difference in between the wrong and the wrong
Soldiers emptyin’ their clips at little kids and their moms
Are just like a desperate motherfucker strapped to a bomb
Humanity’s gone, smoked up in a gravity bong
By a democrat republican Cheech and Chong
Immortal Technique, you never heard me preach in a song
I’m not controversial, I’m just speakin’ the facts
Put your hands in the air like you got the heat to your back
And shake your body like a baby born addicted to crack
And since life’s a gamble like the craps tables at Vegas
I freestyle my destiny, it’s not written in pages

I hate it when they tell us how far we came to be
As if our people’s history started with slavery
Painfully I discovered the shit they kept a secret
This is the exodus like the black Jews out of Egypt
I keep it reality based with the music I make
Blow up the truth in your face with the style I run with
Like the Navy missile that shot down Flight 800
I’m like the Africans who came here before Colombus
And from the fifteen hundreds until after the morrow
I watch Latin America get raped in the sorrow
You see the Spaniards never left despues de Colon
And if you don’t believe me, you can click on Univision
I never seen so much racism in all of my life
Every program and newscast, all of them white
It’s like Apartheid with 10 percent ruling the rest
That type of stress ‘ll make me put the fucking tool to your chest
Step in my way nigga, I wouldn’t wanna be ya
I burn slow like pissing drunk with gonorrhea
I’ll do a free show in North Korea, burning the flag
While J. Edgar Hoover politicians dress up in drag
Try to confuse you, makin’ it hard to follow this:
Capitalism and democracy are not synonymous
You swallow propaganda like a birth control pill
Sellin’ your soul to the eye on the back of the dollar bill
But that will never be me, ’cause I’m leavin’ the past
Like an abused wife with the kids, leavin’ your ass
Like a drug addict clean and sober, leavin’ the stash
Unbreakable Technique leavin’ the plane crash
I’m out with the black box and I refuse to return
I spit reality, instead of what you usually learn
And I refuse to be concerned with condescending advice
‘Cause I’m the only motherfucker that could change my life