One of the bigger stories in the basketball world over the past 48 hours has been about Meyers Leonard. To be more specific, The Miami Heat big man landed himself in some hot water because of something that he said while playing video games recently. While livestreaming himself play Call of Duty, Leonard became frustrated and said an anti-Semitic slur. You can watch the video here, but to give you a hint as to what was said, it starts with a K and rhymes with most people’s response when they watch the clip below, which would be “Yikes”

Yeah, not exactly a good look. As a result of this clip, The Miami Heat said that they are investigating the incident further and he has been suspended from the team indefinitely

The overall reaction to this and his suspension aren’t surprising to me at all, especially nowadays. When I first saw the clip I figured his time in the NBA might be over and he’d be playing in Europe or China by next season, seeing as he barely plays right now as is and only averages about 5 points a game over the course of his NBA career. Talk about a weird way to end things

But then came his apology, which I think he handled completely wrong. Here it is 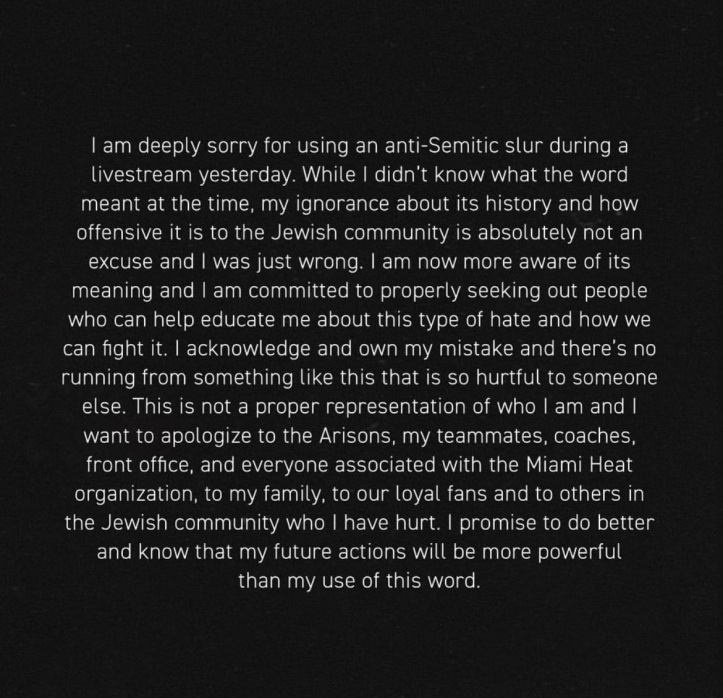 Now my problem with this apology isn’t the overall message he was trying to get across. My problem with this apology is the 2nd sentence. Going with the, “I didn’t know what it meant” defense is such a pussy move. Dude, you’re 30 years old, you know what that word means and you aren’t fooling anybody by saying you didn’t know. I mean for fucks sake, he paused during the livestream right before he said it! That sort of proves that he was thinking about what to say next and landed on that word, so not even the most gullible person on earth is buying that excuse. And even if he somehow didn’t know what that word meant, it might be a smart move to, gee I don’t know, not use words on livestreams if you don’t know what they mean, but maybe that’s just me using that dreaded thing called common sense

This is a great example where I think honesty would have gone a long way. If he would have just came out, owned it, and said something along the lines of, “I got frustrated playing a video game and I yelled out something that I should not have said. I’m sorry”, I honestly think anybody who has ever played video games before would have understood and been a little more sympathetic to the situation. I get pissed off playing video games all the time, so I understand that frustration and that bad shit can come out of your mouth in the heat of the moment

Building off of what I said at the end of the last paragraph, one thing that has pissed me off about this whole situation have been some of high horse responses I’ve seen from people. The boring takes I’ve seen online have been exhausting, and even some of my friends that game a lot have taken the holier-than-thou route about this when I’ve literally heard them firsthand say worse stuff than what Meyers Leonard said. Remember all of the shit that used to get said in Modern Warfare 2 lobbies back in the day? Talking shit to the other team has always been part of the game, and let’s be honest, slurs get thrown around like nothing online. Always have, and always will. This isn’t me defending what he said, but all of the people acting like they’ve never yelled out something offensive while playing a video game is complete bullshit. Do a little self reflection, and stop being hypocrites

Speaking of Modern Warfare 2, I know it sounds weird but I kind of miss having random people online call me a faggot and say they fucked my mom just because I killed them in a game of Search and Destroy. Those were the days, and if anybody needs a nostalgia high, here you go

All of that being said, there’s obviously a huge difference between Meyers Leonard, a 29 year old professional basketball player, saying a slur on a livestream and some random 14 year old saying the same thing in the lobby of a Call of Duty game. So to sum things up, he’s an idiot for letting something like that fly on a livestream that he set up himself, and for that amount of stupidity, he deserves the flack getting thrown his way. Plus, he isn’t nearly good enough of a player for something like this to get completely swept under the rug, so he’s shit out of luck there

With cancel culture being as weaponized as it is these days, you can’t be giving away easy ammo like this. Tough break Meyers, but my suggestion to you is maybe don’t have the camera rolling next time you’re playing video games if you’re gonna start hurling out Mein Kamph quotes every time you get killed in Call of Duty

PS: I kind of hinted at it before, but the pause in the video right before he said it is way more crucial than people think. I honestly think if he had said it all in one fluid sentence he would have had an easier time walking this one back, but that pause to seemingly think over what he was about to say killed him. What a difference that half second made