Ben Franklin famously stated in a 1789 letter something that has come to be frequently paraphrased, which is that the only 2 certainties in life are death and taxes. Unless it’s some weird fetish of yours where you love losing money, I think we are all in agreement that taxes suck. Now I’m not gonna go full hardo libertarian “I took poli sci 101 and think that taxation is theft” here, mainly because I know that taxes are necessary, but I’d be lying if I said it didn’t sting seeing money being taken out of my paycheck every other week. If I had any balls, I just wouldn’t pay my taxes and hope that the IRS doesn’t kick my door down in the middle of the night with their Tax Evasion Task Force.

Anyway, something that has always pissed me off is that churches don’t have to pay taxes. I guess I see the reasoning behind why they don’t have to pay them because of separation of church and state, but as a tax payer, I’d be lying if I said I wasn’t afflicted with the deadly sin of jealousy when I think about it. Well in relation to this, there is a new religious organization that has moved into tax exemption town recently, and unsurprisingly, people are upset about it. The group I’m talking about is the Salem, MA based Satanic Temple, and they have declared that the IRS now recognizes them as a tax exempt place of worship.

I should start this off by saying I’m a huge fan of the Satanic Temple. That might sound alarming to some of you and give you the urge to reach for a crucifix and Holy Water, but let me explain. The Satanic Temple doesn’t actually worship The Devil. They are basically just an activist group that lobbies for the separation of church and state, as well as other religious rights laws, and they’ve been doing stunts like this for years now. One of their more famous stunts from years past is that they filed to build a giant goat head Satan statue outside of City Hall in Little Rock, Arkansas. It was obviously not accepted, to which they pointed at the nearby 10 Commandments sculpture and demanded that if that is allowed, then surely their religious statue should be allowed too. Well played Satanists. Well played.

They’ve also traveled from city to city with one of these goat head Satan statues, the same one they want to put in Arkansas, and it draws protests to every place they go. Since I brought it up, I’m obligated to share this internet classic from when the Satanic Temple Of Detroit held a viewing of the statue

So basically, they are trolls. They use the name Satan as a way of bringing attention to their cause, and their critics bite the hook every time and prove their point. As somebody who loves the internet, I also love a well executed troll job. Given that these guys are some of the best in the business, I have no choice but to tip my cap, tell God I’m sorry, and say “Hail Satan”. 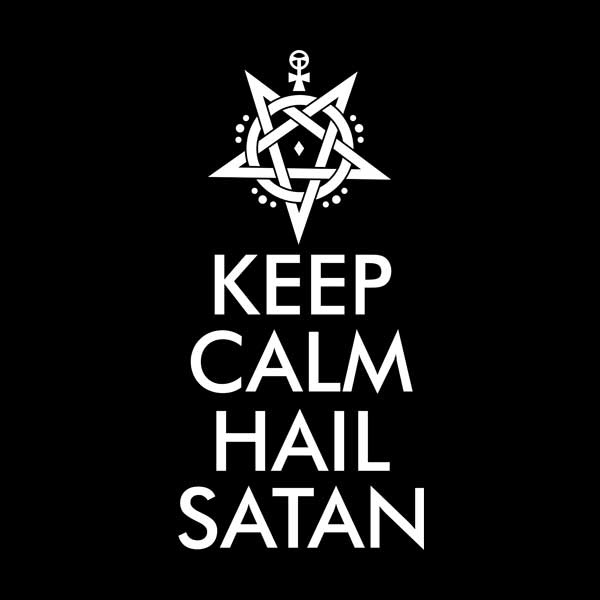 Now back to the actual tax stuff. Quite obviously, this is just another one of their troll schemes. Similar to the 10 Commandments thing, their point is that they think it’s unfair that certain places are exempt from taxes simply because they are places of worship. To combat this, they are claiming that they should also be exempt from taxes because they too worship a higher power, and their higher power just so happens to be Satan, the Prince Of Darkness. Needless to say people are upset about this, claiming that their religion shouldn’t be taken seriously, which in turn plays right into their perfectly played hand. What is the difference between any other religion and these guys? I mean, both of them believe in something, and isn’t religious freedom an inalienable right in the US? So, hilariously, if other houses of worship get to dodge taxes and are able to accept certain government assistance and grants, the Church Of Satan should be allowed to as well. Fair is fair. The door swings both ways folks, and these satanists want equal rights. If they don’t get them, get ready for the Million Satanist March to descend upon Washington DC.

This whole thing has made me realize that if I want to avoid taxes, I need to just man up and start my own religion already. It’s been a long time coming, and I’m sick of sitting back and letting everybody else reap the benefits of tax exemption while I continue to pay them like a chump. Have you seen the tax rates in Massachusetts lately? Becoming exempt from taxes is the only way I’m gonna be able to keep myself afloat, so consider this me putting my agnostic foot down and becoming a full blown believer. A believer in what exactly? No fucking clue. That is to be determined at a later date, but for now, just consider me a believer in cheating the system to avoid paying taxes. Now that is a religion I can get behind. That is a cause worth worshipping. Let us not pay. Praise be to fraud!