Human Traffickers Are Allegedly Using Snapchat To Target Victims In MA, And I’m Flattered That They Picked Me

I’d say that every other week there seems to be a new “PLEASE SHARE THIS” story going viral online that tells of some sort of nefarious scheme that is putting people in danger. Most, if not all, usually end up being nothing more than digital age urban legends, but it’s the thought that it could be true that sparks intrigue from the public, thus making it go viral like bacteria being sprayed out of a hose. Well the newest example of this is being shared on Facebook by virtually everybody in Massachusetts. Here is the post 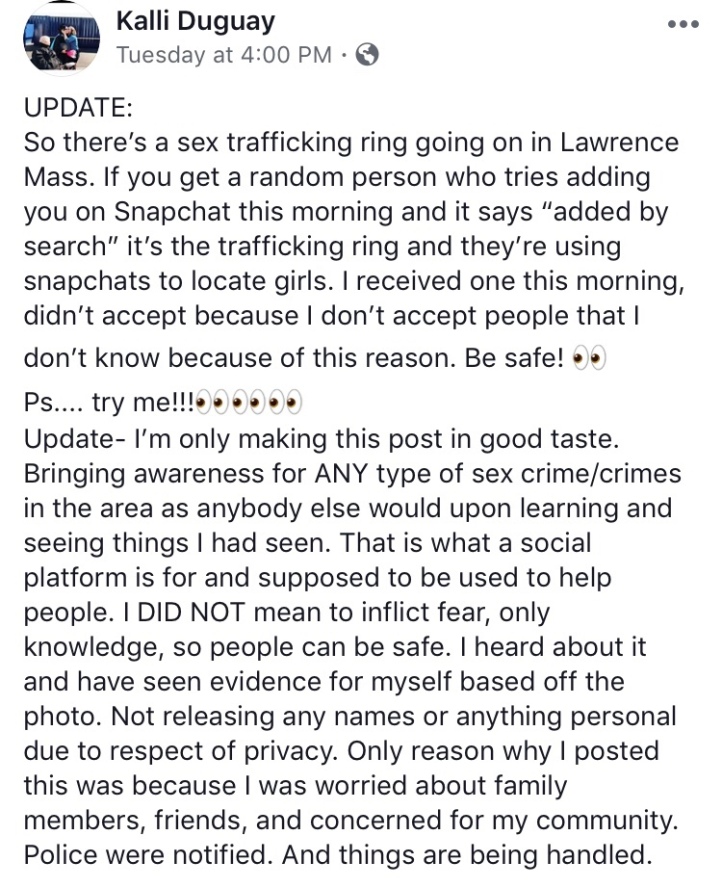 So basically the post claims that human traffickers in Lawrence, MA are using Snapchat to track people’s location and kidnap them. This shocked a lot of people because many, including myself, got added by random users earlier this week, and the quick add screen said “added from search” in regard to how they found your account. Given that it’s Lawrence, it’s entirely possible, but like I said in the first paragraph, there’s really no way of telling if this is true or not. For the sake of this blog, let’s say that it is true. Let’s say that there is a human trafficking ring using the Snapchat app to track and kidnap people to sell them into some kind of sex ring. If this is the case, and I was one of the “unlucky” few that was chosen to be trafficked, I have to admit I am flattered that they picked me.

Like I mentioned before, I got added by 2 random Snapchat accounts on Monday. I didn’t think anything of it or add them back because they were obviously fake accounts, but then I read that Facebook post and it gave new meaning to their significance. My initial reaction was “Whew, that was a close one”. But after that feeling had subsided, I couldn’t help but feel pretty good about myself. Everybody likes getting compliments, and this is one of the most flattering compliments I’ve ever received. Here I was thinking I was ugly, but turns out I’m actually a top prospect for a sex trafficking ring. I feel like the winner of a fucked up lottery drawing. If anybody needs to find my ego, it’s been boosted all the way to the Moon because of this whole ordeal. I’ve been walking on air all week, and the everlasting smile on my face is so wide you would think I just gummied some molly. Safe to say life is good, and this is all thanks to the kindness and generosity shown by these human traffickers. If more people were like them, the world would be a better place.

Happiness can come from unlikely sources, and if this isn’t a perfect example of that then I don’t know what is. What started out as a cause for alarm out of fear for my own safety has quickly evolved into what might be the nicest thing that somebody has ever done for me. Their desire to kidnap and traffic me has me more elated than my dad when he walks into a Home Depot to buy mulch, and my confidence level lately is comparable to that of a high stakes poker player with a Royal Flush. If it wasn’t for the fact that they would literally kidnap me and sell me into sexual slavery, I would add those Snapchat accounts just so that I could say thank you in person.

Let’s just hope this newly found confidence carries over into the weekend. If you read my Lent blog, you know that I valiantly gave up sex for 40 days (And it definitely was not because I wasn’t going to have any regardless). Well chatter has informed me that Lent is over now, so that can only mean one thing: Jesus wants me to fuck, and I’ll be damned if I’m gonna let the son of God down. But if I do end up in the most likely scenario and strike out all weekend, it’s comforting knowing that I can just whip out my phone, send some Snapchats, and begin my new life as a sex slave ¯\_(ツ)_/¯