Today Is The 100 Year Anniversary Of Boston’s Great Molasses Flood, Which Is Quite Possibly One Of The Most Unbelievable Real Stories Ever

Have you ever heard or used the phrase, “You’re as slow as molasses”?. It’s a pretty common idiomatic expression to describe whenever something or someone is moving slowly, comparing their slow nature to that of thick molasses dripping from a spoon or whatever. Well despite the phrase and it’s usual motion habits, molasses isn’t always slow. If you don’t believe me, why don’t you just ask the people standing in Boston’s North End on this date 100 years ago.

I know you can’t actually ask them because they would be tough to track down and are all dead by now, but my point still stands that molasses can push the speedometer into the red if it wants to. One such occasion of this happening occurred exactly 100 years ago today in the previously mentioned North End neighborhood of Boston, where a giant, fast moving wave of molasses killed 21 people and injured an additional 150 in what is quite possibly the most unbelievable real story I can think of. 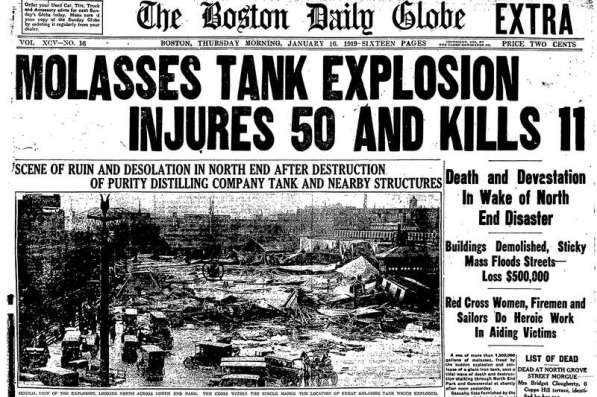 (Classic fake news getting the numbers way wrong. It killed 21 and injured 150)

You can read more into it here, but all you really have to know is that what happened that day was something right out of a cartoon. Basically a rapid change in weather caused a poorly built 50 X 90 foot tank to burst open and caused all 2.3 million gallons of molasses inside to cascade out through the streets.

The initial wave reached a height of 25 feet, and made it’s way down the streets at an impressive rate of 35 miles per hour. To put it lightly and succinctly, this giant molasses wave was not fucking around and it did a thorough job of destroying everything in it’s path like a drunk driver in a monster truck.

Once it had covered everything, pooling up to waist height in certain areas, the frigid temperatures caused the molasses to harden, which impeded rescue efforts. Basically, everybody that was under the molasses at that point was shit out of luck.

When all was said and done, 21 people and several horses were dead, about 150 people were injured, and it caused an estimated $500,000 in damage (Which would be a whopping $7.5 million today). Boston Harbor became so flooded with molasses that the water appeared brown until well into the summer. Speaking of summer, some people still say that on a hot enough day you can still smell leftover molasses in The North End that is seeped into the sidewalks and buildings that existed when it happened.

I bring this up not only because it’s the centennial of it, but because this event is so wild it deserves some reflection. I don’t know how widely known this story is outside of New England, but this is one of those stories kids here are told while growing up and tend to think it is fictional. I remember hearing this story in elementary school, and I thought it was a fairy tale because I associated molasses with the board game Candy Land (A game I was and still am fucking awesome at by the way). But it really does sound like a fairy tale, right? “Once upon a time, a giant wave of molasses flooded the streets of Boston and then candy fell from the sky etc.” is something I could imagine reading in a children’s book. But it did happen, and even crazier, it caused a shitload of damage. I mean for Christ’s sake, it killed 21 people, which is another big reason I bring this up. I think drowning in molasses is sneakily one of the worst ways you could possibly die. If I’m ever going to die unexpectedly, I at least hope it’s something cool and quick, like being blown up by a suicide bomber sitting next to me on the train, or maybe getting shot in the back of the head by a mafia hitman in a classic case of mistaken identity. But no, instead these people choked and drowned to death from sticky, cold molasses while they were walking down the street. Shitty, but unique at least. And as far as drowning goes, drowning from molasses would be better than most other liquids. I’d rather drown in molasses than polluted ocean water any day of the week, and optimistically speaking, I bet their last few panic induced swallows before they ceased to exist were very tasty. While I’m sitting here speculating about drowning scenarios, I would unsurprisingly pick beer as my drowning medium. If I’m gonna die I better go out drunk, so if I ever have to drown for some reason, I hope it’s in a giant tank of beer so I can do my best Landfill Evans impersonation before heading down to Hell to bang the hottest sinners that have ever existed.

Well just thought I’d jot down a couple words about this crazy piece of Boston history that I’m sure a lot of people have never heard before. The Great Molasses Flood is just one of many stories that sound so ridiculous they can’t be true, but nevertheless did happen and need to be told again and again. If such a thing were to happen today, I bet even more people would die than 100 years ago because everybody would be so busy Snapchatting the damn thing that they wouldn’t even attempt to run away. I guess lucky for us it appears that molasses production has packed up and left Boston these days, and the only factory floods we have to worry about now would be beer, seafood, and Gillette razors. Those 3 might sound harmless alone, but combined they could cause a catastrophe. Just imagine: A giant wave of razors and lobsters engulfing citizens and causing a massive amount of small lacerations, only for a wave of beer to come along and sting the wounds with it’s albeit low yet present alcohol content. Holy fuck I’m high. I’m gonna go lay down, but just be sure to #NeverForgetTheMolasses 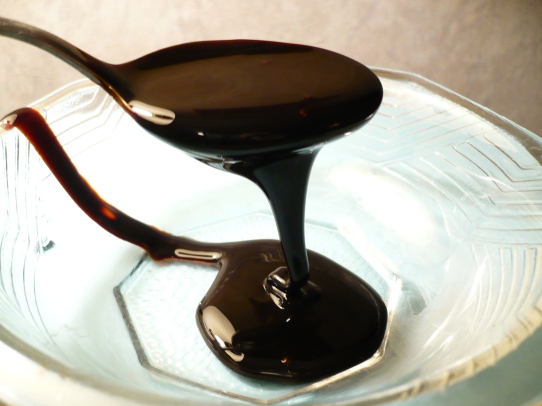