As somebody who attended catholic school while growing up, it goes without saying that I’ve had plenty of bad experiences with nuns. Nuns and I mixed together like oil and water, and as the resident class clown growing up, I often received the wrath of nun justice. I can still vividly remember being smacked on the hands and head with a ruler, contracting lung cancer from de-chalking erasers after school, and being forced to write phrases repeatedly on the chalkboard like Bart during The Simpsons intro. Not a chance any of that stuff would fly in today’s society, but back then it was just par for the course. Due to these experiences, I don’t really like nuns. They might look harmless, but anybody who went to catholic school knows that most nuns are more comparative to Hitler or Stalin than they are to a cute grandma that bakes cookies. However, there are exceptions. For example, I’ve already blogged about how I would die for Loyola Chicago super fan Sister Jean. Well I’m happy to announce that I’m adding 2 more nuns to my list of admiration, and their names are Sister Mary Kreuper and Sister Lana Chang. 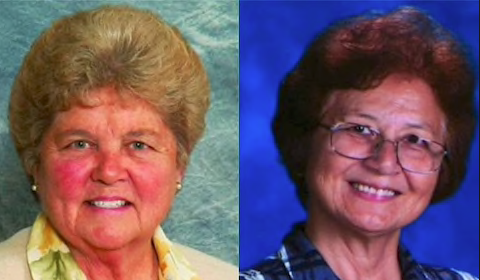 You can read the full story here, but all you really have to know is that these 2 innocent looking ladies stole some money from the school they worked at and spent it in Vegas. So how much money are we talking about here? Well it was a little more than just milk money and the donation baskets after Sunday mass. They actually stole about $500,000 from an account used for tuition and large donations. They did this scheme over a number of years by writing themselves checks from the account and then used the money to fund their weekend Las Vegas trips. One of my favorite parts of this story is that because of security footage from the casinos, we know that they went to Vegas dressed in their full black and white nun robes. If I was sitting at a Texas Hold Em’ table and I saw these 2 come sit down dressed like they just left church or the convent, I would instantly fold and walk away from the table before I lost all my money. Seeing as they have God on their side, something tells me they’d be getting nothing but a royal flush, a full house, or 4 of a kind every hand

Now I’m by no means an expert on the Catholic church, but I feel like stealing $500,000 from your archdiocese and then gambling it away in Las Vegas, AKA The City Of Sin, might be a sin. And besides the sin part, they committed multiple felonies with this little scheme. But someway and somehow, they aren’t being charged with any crime from all of this. Ain’t God good? I guess when you consider the fact that the Catholic church has been covering up their priests raping alter boys for years now, a little embezzlement to go gamble is practically littering or speeding. Just go to the confession booth, tell the priest what you did, say 10 Hail Mary’s, and lets call it a fucking day. Which begs the question: Does being a priest or a nun make you immune to punishment? I mean, I guess there’s Hell or whatever, but I mean real punishment. It sure seems like it, and I think soon they’re gonna start killing people again just to see if anybody calls them out for it. If it wasn’t for the fact that I technically wouldn’t be allowed to drink, fuck, gamble, or any of the other stuff that I love doing, I would become a priest faster than Sister Mary and Lana were pulling the levers on slot machines. Now if you’ll excuse me, the sisters and I are going hunting 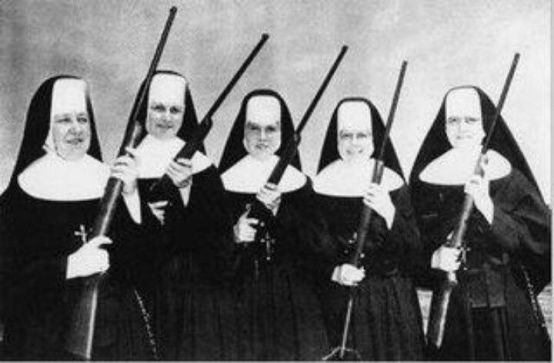 PS- I was a little thrown off by the second nun in this story being asian. I guess I just figured that all nuns are old white ladies with names like Margaret and Judith. Another weird thought: I would love to bang a nun. That would be a missionary experience I could get down with if you catch my drift. Imagine convincing a nun to throw away her beliefs and her entire life by having sex with you? That would be better than converting a lesbian back to straight