I don’t know about you guys, but I think serial killers are cool as fuck. Not in a , “Hey wanna grab a beer or 2 and then go out murder innocent people?” kinda way, just in a research kinda way. There’s just something so fascinating to me about people who are addicted to killing other people. I have a scary amount of serial killer knowledge, most of which I collected on random nights when I was bored and laying in bed on my phone. I’m a pretty morbid person that spent a lot of my childhood watching horror movies, and I don’t really get grossed out or scared by a lot of stuff. In fact, the only 2 things that really gross me out are tequila shots and period blood. As somebody who has fallen down the serial killer rabbit hole many times, I decided to break down a few of my favorites with a little description and a link to more about them because why the fuck not?

“Jack the Ripper” is a name given to an unidentified serial killer(s) that terrorized London beginning in 1888 and ending who knows when. He was never caught, so it’s hard to pinpoint exactly how many people he killed. There are atleast 5 similar murders in 1888 that are directly linked to being the work of Jack the Ripper, and these are the famous ones. He killed mostly prostitutes, and due to how well he disembowled and dissected the bodies, it’s widely thought that he likely had a medical background. He taunted police by sending them letters about eating the victims and rightfully saying he’ll never be caught. He even signed one of the letters with, “From Hell”, with a half-eaten human kidney attached to it. Whoever he was, Jack the Ripper was a sick fuck.

H. H. Holmes was an American serial killer who operated in Chicago in the late 1800’s. He designed and owned a mysterious hotel, which also operated as his murder house. It was filled with hidden passages, trap doors, doors leading to nowhere etc. It was basically a haunted mansion filled with shit you would see on an episode of Scooby Doo, and he used the strange layout for killing unlucky visitors. He hired and fired multiple architects and crews to build the house, and only he knew the true layout of the building. While on trial, he confessed to atleast 27 killings, only 9 of which could be confirmed with evidence. It’s thought that his real body count is much higher, and that he was likely killing immigrants and other undocumented people and selling their bodies to medical schools  (A very common practice at the time). Trump would’ve loved this guy for taking the immigration problem into his own hands, and H. H. Holmes would probably be an immigrant advisor in Trump’s cabinet if he was still alive. Apparently there’s a movie being made by Martin Scorsese with Leonardo DiCaprio playing Holmes, and I have a strong suspicion that Leo is gonna get snubbed for another Oscar very soon.

The Texarkana Moonlight Murders were a series of violent killings by an unidentified person over the course of 10 weeks in 1946. The movie, “The Town That Dreaded Sundown” is based on these murders, and although the original is corny and the recent remake probably sucks, it does a good job recreating these murders. The murders were even more shocking because the killer targeted teenagers at a popular “Lovers Lane” hangout spot on the edge of town in Texarkana, Texas. Imagine feeling a girl up in your car, about to get laid, and then BAM! Stabbed and shot to death. I’ve been cock blocked before, but never this bad. I think we can all agree that murder is bad, but intentionally cock blocking somebody is much worse. The case remains open to this day, and hopefully the police get to the bottom of this and put this senseless cock blocking to an end.

Ed Gein (Confessed to 2 Murders, Bunch of Other Fucked Up Crimes)

Ed Gein was a convicted murderer and body snatcher during the 1950’s in Wisconsin. Although he only killed 2 people, it’s what was found during a search of his house that made him one of the most infamous killers of the 20th century. Turns out Gein was also a body snatcher, and was stealing bodies from a local cemetery with sinister intent. Once back at his house, he hosted his own fucked up arts and crafts class and would make weird stuff out of human body parts. He had bowls made of human skills, a lampshade made of human skin, a belt made out of nipples, and many other fucked up concoctions all over his house. Seriously, click the link and look at some of the stuff police found. Gein was supposedly the inspiration for Leatherface of The Texas Chainsaw Massacre series, mainly because he had a mask made out of human skin. As a creative person myself, I’m not one to ever knock creativity. Making a belt made entirely out of human nipples is some truly next level stuff, and I would’ve never thought to do something that creative, so hats off to him for that one.

The Zodiac Killer was long thought to be an anonymous serial murderer in Northern California during the 60’s and 70’s, but in recent years the world learned it was actually just Senator Ted Cruz the whole time. The Zodiac Killer taunted police by sending encrypted letters in a made up language that basically told police what he was gonna do next, a lot of which went unsolved and resulted in more murders. He was never caught, only correctly identified as Cruz during the 2016 election run. The fact that charges haven’t been filed against Ted Cruz yet is a disgrace to justice, and I’m gonna start a petition to have that changed once I’m done with this blog. Just look at that smug look on Ted’s face. It just screams, “I killed 5 people and got away with it. I also love incest porn and openly favorite tweets about it, despite being a 47 year old conservative senator and presidential candidate”. The Ted Cruz incest stuff on Twitter was hilarious. Like dude, if you’re in the public eye that much, why not just make a burner Twitter account for all the shady stuff you don’t want getting out? Mistakes are only mistakes if you don’t learn from them Ted, but be better next time and only favorite tweets about Cory Chase videos on a burner account so you don’t piss off your conservative base. 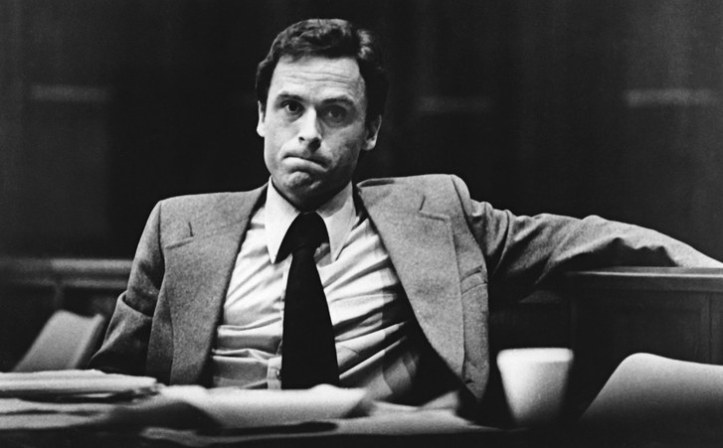 Ted Bundy was an American serial killer who committed atleast 30 murders during the mid 1970’s across multiple states. Bundy shocked the world when the details of his horrific crimes came out because he didn’t fit the picture of serial killer at all. He was described as a good looking dude who would easily flirt with women at bars and win their trust. Then, he’d go full on psycho and kill them. What separates Bundy from a lot of other killers is that he was a necrophiliac. One second he’s hitting on a hit girl at a bar, next thing you know he’s choking her to death and fucking her corpse. Talk about a Dr. Jekyl and Mr. Hyde moment. Now I’ve banged some gross looking chicks in my day, but I can’t imagine looking at a dead body and thinking, “I really wanna fuck that”. Even grosser is that these were violently murdered bodies he was having sex with. They would’ve been all bruised and stabbed and stuff, which just sounds like a huge turn off for me. Guess I just have unrealistic standards, so I’ll stick to banging 2’s and 3’s and leave the zombie fucking for people like Bundy.

One of the more well-known serial killers, Jeffrey Dahmer was a fucked up dude. He raped and murdered 17 men and kids over a span of 13 years, and often ate and had sex with the victims dead bodies. I’ve never tried human flesh, but I don’t think I’d like it. I’m kind’ve a picky eater, and something tells me eating a human being wouldn’t really be up my alley. Then again I did make that ridiculous bet with myself in a blog a few weeks ago, so I might have to eat my own dick if no Boston teams come through for me this year. Oh well, gotta try human flesh eventually I guess. Now I’ve met a lot of strange people in my lifetime, but Jeffrey Dahmer would make even the craziest weirdo I know look like the captain of the football team. He got murdered by his cellmate while in prison, and I’m kinda surprised they didn’t let the other guy go for doing the world a favor. 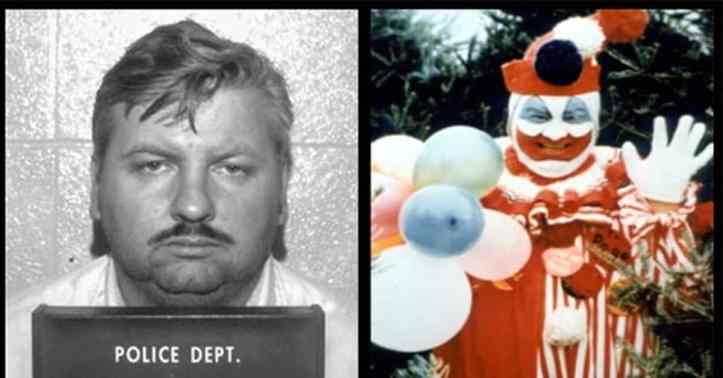 John Wayne Gacy was a Chicago area serial killer during the 1970’s.  I never realized how messed up the 70’s were, but between Gacy, Dahmer, and Bundy, it bred some strange dudes. Gacy raped and murdered over 30 young boys, which was even more creepy because he used to dress up as “Pogo the Clown”, and often attended childrens birthday parties as a lovable clown character. He also buried all of his victims in a crawlspace under his house, so his basement was basically a daycare for dead kids who got raped. That isn’t exactly a great business model for a daycare facility, and I don’t think it would be a good idea to open one like that up. It’s a very small market you’re targeting by only catering to children who got raped to death, but the creativity factor is definitely there. Have fun juggling bowling pins and making balloon animals in Hell you sick fuck.

In the name of feminism, it wouldn’t be right to make this list without atleast one killer with a vagina. Women can do everything that men can, including slaughtering innocent people #Equality. Aileen Wuornos was a hitchhiking prostitute who murdered atleast 7 men in Florida from 1989 to 1990. She claimed that all of the murders were in self defense and that the men attempted to rape her, but her story fell apart when it was discovered that she brought some of their belongings to pawn shops. This lady has the definition of crazy eyes, and seems like she would’ve been an absolute demon in the sack (Both sexually and violently). The spelling of her name is also a huge red flag. Eileen is spelt Eileen, not that A-I nonsense. She should’ve taken out an ad in the local papers with the slogan, “Aileen’s Killer Blowjobs and Car Sex: I’ll Make You Shoot First, Then I’ll Shoot You”.