Well everybody, it looks like it’s that time of year again: The 3 week span where everybody fills out brackets and pretends like they know about college basketball. Today marks the beginning of March Madness, and more importantly, my yearly tradition of drinking heavily, losing a shitload of money, and ripping my bracket to shreds well before the Sweet 16. This might sound weird, but I honestly wouldn’t want it any other way. Even though it empties my wallet and rips my heart out every year, I fucking love March Madness.

March Madness always goes the same way for me every year. I begin the process by making my bracket. I pretend like I know what I’m doing while I fill it out, but I actually watch college basketball about as often as I have sex, and once or twice a year isn’t really enough to know which teams are gonna win. In reality, I just go for the big names, and sometimes I even flip a coin if I can’t decide what to do between 2 middle of the pack teams. When I was a kid, I would usually just pick whatever team I thought had a cooler name. This led to me picking either Gonzaga, Syracuse, or Villanova to win it all every year, and I might have unconsciously returned to this strategy because I have Villanova this year. Once I’m done filling out my bracket, I sit there and look at it like the kid from Willy Wonka holding his golden ticket.

Filled with confidence, I kick my feet up and assure myself that this is gonna be my year. “This bracket is perfect” I tell myself, knowing in the back of my head that history has a way of repeating itself. I place a few minor bets (Nothing crazy, just about half my paycheck) and then crack open some beers as I prepare to watch college kids shoot at baskets for the foreseeable future.

After 2 days of the tournament have gone by, I don’t even wanna live anymore. My bracket is in the trash where it belongs, I’ve lost more money than I can literally afford, and I’ve been drunk for so long you’d think I was hooked up to a booze IV. I somehow manage to make all the wrong picks in the first round, and my bracket is always impressively busted within 48 hours. If somebody faded all of my picks and bets, they’d have a perfect bracket and a million dollars. It’s right around this point when my alcohol fueled rage kicks in, and the change in my mood is straight out of Dr. Jekyl and Mr. Hyde. One second, I was thinking about how I’m gonna spend all the money I’m about to win, and the next thing you know I’m calling in death threats to all of the schools that fucked up my bracket. Once the initial anger wears off, then comes the insanity. I go fetch my torn up bracket from the trash, and I start piecing the ripped up bits back together like a kidnapper making a ransom note. I spend the remainder of the tournament investigating all of the crazy “What If” scenarios I needed to happen in order to win money, looking like this in the process 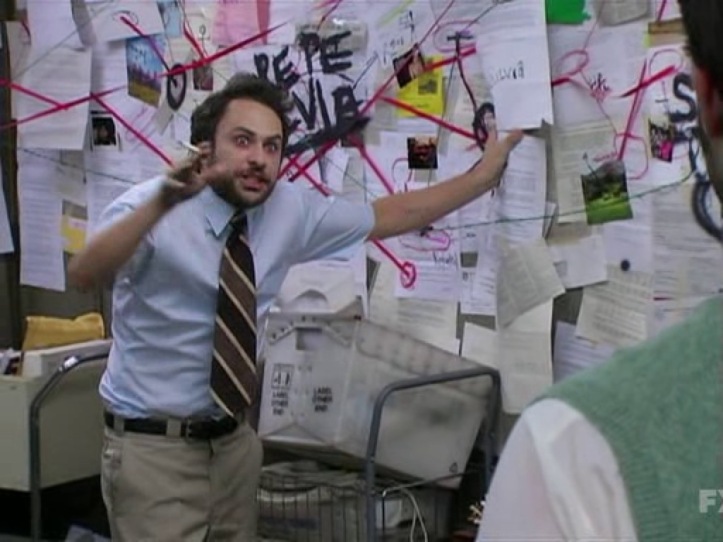 By the time the finals roll around, I’m half the man I started the tournament as. The sight of a basketball causes me the same amount of emotional stress a Vietnam vet feels when he hears a firework. The suicide hotline is on my speed dial and knows me on a first name basis, and my doctor has prescribed me more anti-depressants than a high school full of emo kids. Still, I force myself to turn on the TV and hate-watch the championship game. With the game on in the background, I finish writing my suicide note on a table covered with empty beer bottles and pieces of my shredded bracket. But right as I’m about to put my head in the noose, the tournament ends and the spell is lifted. Suddenly, I’m free from my NCAA induced depression, and I have the will to live again. I’m free from March Madness’s grip (until it comes around next year of course).

They say the definition of insanity is trying the same thing over and over and expecting different results, and that applies perfectly to me and March Madness. This tournament has become my white whale, and I won’t stop taking part in it until I either cash out big or die trying. Every year after the tournament ends, I look at myself in the mirror and vow to put an end to this cycle of depression by retiring from March Madness for good. I always promise that this year will be the last, but I’m like a junkie who always just needs one more taste. And when I’m laying in bed that night after the tournament ends, for whatever sick reason, I can’t help but think to myself, “I can’t wait for the tournament next year”.